Here I'll try and cast some light on the different Squier Mini Serial Numbers with a few examples. General serial number info at the bottom of the page. Enjoy.

This guitar was made by Samick in Indonesia and is a typical representative of the most common Mini in terms of appointments and color. Note the "affinity" silkscreen on the nose.

Below is a view of the backside of the peghead. The inspection sticker is clearly shown. The exact same sticker appear on guitars with serial numbers starting with "SI", so the two are probably under the same management. Note also the original tuning machines.

The back of the peghead. Note the inspection sticker.

The second Mini Strat in my collection was made in the same Samick plant. Not a lot of difference. "Affinity" at the nose still present. 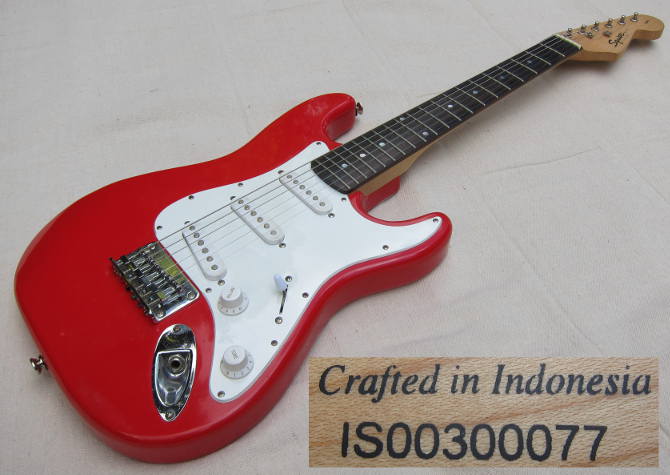 This guitar also has the original tuners. One ever so slight difference, is the font of the "Crafted in Indonesia" has changed. 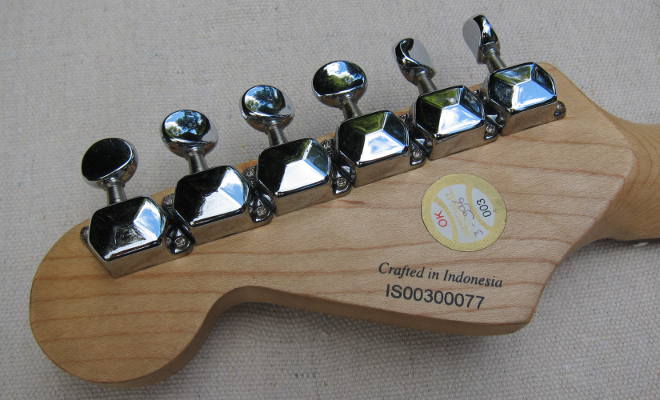 This example is a neck I picked up from fleabay a while ago. Notice the absence of the verbiage "affinity" at the nose. 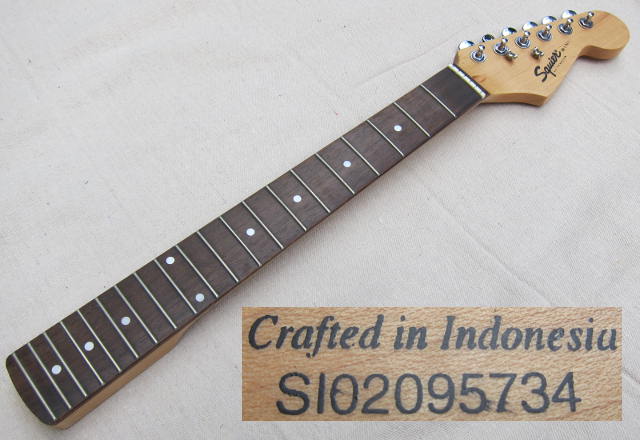 When I bought the neck it had the original tuners. Not entirely unexpected, they were in pretty poor condition and had to go. This picture was taken after I installed the new tuners. The fonts are an exact match in size and type with the IS00300077 above and has the same quality control sticker. One difference is the inspector is filled in with a name and a date (9/02). These similarities lead me to believe they are made under the same management (S=Samick), but probably two separate locations. 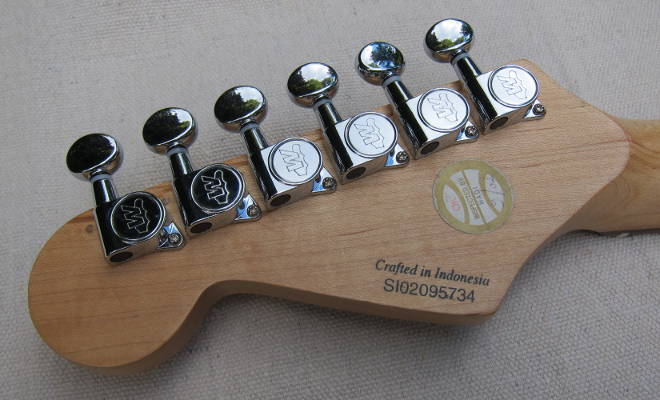 Back of the peghead.

This guitar was made by Cort in Indonesia. They use nine digits for their serial numbers and the "s/n" in front. No "affinity" silkscreen on this peghead.

Squier Mini Strat made by Cort.

This guitar has the original tuning machines as well. No inspection sticker, but the words "Designed and Backed by Fender" which neither of the others have. 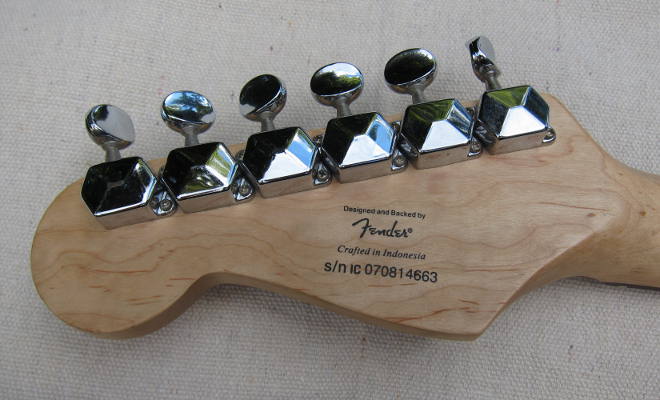 Back of peghead made by Cort.

I had already started to strip this guitar before I got the idea to write this page. This guitar is a real oddball. The build quality and finish is as good as the others even after a close look. The first immediate difference is in the wood used for the neck. This ain't no Maple.

The serial number looks right at first. Font and size is right and the verbiage both front and back match that on the previous guitar. The print looks somewhat smudged, which combined with the exotic wood seems a little off. The space between the "C" and the "0" is cramped, in lack of a better word. 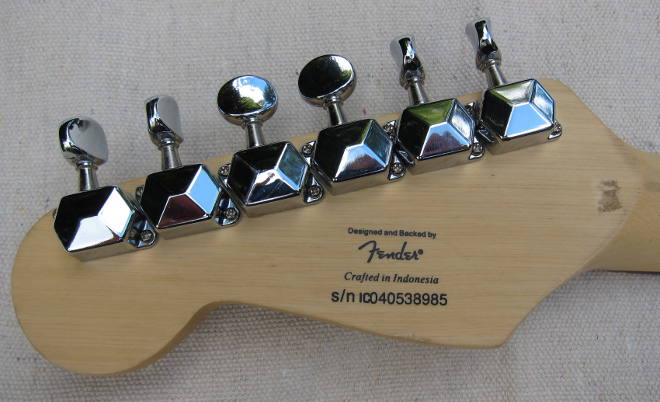 Back of the peghead. Notice the wood grain - this is not maple.

Looking at the back of the peghead it looks right. Tuners look the same.

Upon close inspection of internal components I noticed several small but significant differences with the other guitars. I will examine this guitar closer on a separate page in the near future.

The Squier Mini is manufactured in at least two different plants, both in Indonesia. Fender and Squier serial numbers, for guitar made overseas, has in the last 20 years or longer consisted of two letters followed by eight (sometimes nine) numerals.

The two letters leading denotes what plant the instrument was made in. In the case of the Mini Strats, I have seen "IC", "IS" and "SI". "IC" are made by Cort while IS are made by Samick, both in Indonesia.

The source of the Minis with serial numbers starting with "SI" have been difficult to research. The word on the net is that they denote the fact they  were sold in a kit or bundle with a cheap practice amp, cable, picks and some other material geared toward young beginners. I'm not convinced this is the case. Why would a company use a different serial number because it is sold in a bundle? There would be too many disadvantages and doesn't make any sense. There is no other difference.

These "SI" Minis have the same inspection sticker on the back on the peghead as those with "SI" serial numbers. Both say "Crafted in Indonesia" but with different fonts. My theory is that there is a second Samick location that produces these guitars, and to distinguish there is a different source, the letters were switched around. Yet to be confirmed though.

In a couple of instances I have noticed guitars with an orange sticker with a number, that does not conform to the standard number structure. As I recall they are 10 or 11 characters, all numerals. This is a relatively common practice when non-conforming guitars are sold in bulk to a dealer/middle-man who refurbish them and sell them to the open market.

I have been looking at many Mini Strat listings by now, and I can not remember ever seeing a black Mini that did not have an "IC" serial number. Red I have seen all three, but "SI" seems to be dominant.

In 2008 Fender started having "Fender" branded instruments made in the Cort facility in Indonesia for the first time. The new series of guitars were given serial number starting with "ICF" - with the letter "F" for Fender. At the same time Squiers made in the same factory started getting serial numbers with "ICS" - where "S" stands for Squier to follow the same pattern.

For many years I believed the first two numbers in the string of eight/nine was the year the neck was made. It seemed to make sense, especially considering the guitar above (SI02095734) where the inspection date (9/02) was written by hand on the inspection sticker.

It all made sense until I learned Fender started manufacturing Squier guitars in Indonesia in 1999 (thanks Martin!) - one of my Minis has "90" in the serial number - there went that theory. That said, it seems reasonable to assume there is some correlation with these numbers and year of manufacture on some guitars, but doesn't seem to always apply.

There are comments on the net saying the next two numbers are the month. I believe that to be incorrect, as two out my guitars have "60" and "30" in those places.